During the visit, collaboration possibilities between LUMC and the Chinese universities were discussed. Peter and Jaques also gave scientific seminars in these universities. In addition, Jacques, Peter and Baoxu were invited to attend the 80th Anniversary of Norman Bethune Medical Discipline of Jilin University, and the International Medical Academic Forum of Norman Bethune Health Science Center of Jilin University.
During the visit, Jacques and Peter received the Honorary Professorship from Xi’an Jiaotong University. Jacques, Peter and Baoxu received the Visiting Professorship from Jilin University. 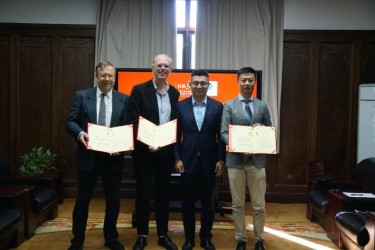