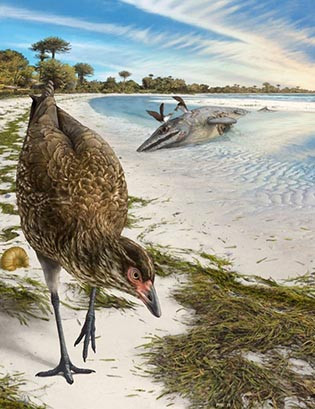 Already in 2000, a fossil of some 66.7 million years old was unearthed at Sint-Pietersberg, but only now it has become clear that it represents an early relative of modern birds such as chickens and geese.

The fossil described, around 66.7 million years old, was collected in 2000 by Maarten van Dinther, who is employed as a lab technician at the Cell and Chemical Biology Department of the Leiden University Medical Center.

About this find, palaeontologist Dr John Jagt at the Natural History Museum of Maastricht says, “Maarten van Dinther’s keen eye has given us a great present – this is world class news!’’

A comparison with modern birds suggests that Asteriornis may have weighed around 390 gr. It was an animal that probably lived in the coastal areas of a subtropical sea. Unlike fish-eating birds (Ichthyornis group) that had been recorded earlier from the Sint-Pietersberg area, the newly described specimen had no teeth.