The genetic manipulation of human stem and progenitor cells, either in a transient or permanent basis, opens a wide range of research possibilities that include the study of their biology as well as their use in gene and cell therapies. From the plethora of methods available to introduce foreign nucleic acids into cells, those based on recombinant, replication-defective, viruses (viral vectors) are among the most effective. This stems from the fact that viral vectors borrow the fine-tuned mechanisms that have been evolved by their wild-type counterparts to enter host cells.

Targeted double-stranded DNA break (DSB)-induced genome editing permits changing specific DNA sequences in living cells, ideally, without collateral chromosomal mutations or rearrangements. The delivery of programmable nucleases alone or together with donor DNA templates can yield gene knockouts and gene knock-ins mainly through the recruitment of the non-homologous end joining (NHEJ) and homology-directed DNA repair (HDR) pathways, respectively. There are, however, many crucial aspects linked to DNA editing processes that, clearly, require further investigation. In this regard, we focus on three interconnected research lines that build upon viral vector and gene editing technologies and whose goals are.

(1) Improving the delivery of programmable nucleases and donor DNA templates into human cells.

The sizable packaging capacity of adenoviral vectors (AdVs), combined with their strict episomal nature, high-titers and efficient transduction of dividing and non-dividing cells, offers an attractive set of features worth exploring for genome editing purposes. Hence, we focus on testing the feasibility and utility of using conventional and capsid-modified adenoviral vectors (AdVs) for introducing into the nuclei of target cells donor DNA substrates and programmable nucleases based on transcription activator-like effectors (TALEs) and CRISPR-Cas9 systems. To this end, we construct and test helper-independent (i.e. 1st and 2nd generation) and helper-dependent (i.e. 3rd generation or “gutless”) AdVs, whose tropism has been modified to permit efficient ex vivo transduction of therapeutically relevant human cells, e.g., hematopoietic stem cells and muscle progenitor cells (Figure 1). Importantly, the production of these viral vectors takes place in GLP-grade complementing packaging cell lines designed to prevent the emergence of replication-competent adenoviruses (RCAs).

(2) Studying the impact of epigenetic processes on the performance of genome editing tools and strategies.

Once inside cell nuclei, genome-editing reagents derived from prokaryotic systems (i.e. TALE and CRISPR-Cas9 nucleases) have to contend with target sequences embedded in epigenetically regulated higher-order chromatin structures. In this regard, knowing the influence of alternative chromatin states (e.g. “open” euchromatin versus “closed” heterochromatin), on the performance of programmable nucleases per se and gene editing strategies as whole, is important. Hence, we have implemented quantitative cellular systems in which the euchromatic and heterochromatic statuses of isogenic target sequences are stringently controlled by small-molecule drug availability. These cell-based reporter systems, permit screening and selecting specific programmable nuclease reagents from different platforms or with different architectures and compositions. In addition, they are valuable for assessing the balance between HDR and NHEJ events resulting from the interaction between alternative chromatin conformations and different donor DNA structures (e.g. single-stranded oligonucleotides versus double-stranded plasmids).

(3) Improving the specificity and accuracy of genome editing procedures.

A shortcoming of HDR-based genome editing is the fact that DSB repair often occurs through the competing and mutagenic NHEJ pathway. As a result, allelic mutations, translocations, and other unwarranted structural variations caused by on-target and off-target DSBs, are common. Furthermore, NHEJ also contributes to random and imprecise chromosomal insertion of the donor DNA. To address these issues, we are investigating the feasibility and utility of using CRISPR-Cas9 “nickases” that generate single-stranded DNA breaks (SSBs). In contrast to DSBs, SSBs (or nicks) are not substrates for NHEJ while they are still capable of stimulating HDR, albeit at low efficiency. Importantly, our research has shown that coordinated SSB formation at target and donor DNA templates (in trans paired nicking) yields efficient, precise and non-mutagenic genome editing in human cells, including pluripotent stem cells.  We are hence further exploring this strategy and its underlying mechanisms (Figure 2). Next to this, we investigate the performance of different donor DNA substrates (e.g. linear, circular and protein-capped) in bringing about targeted and accurate exogenous DNA knock-ins. In this regard, donor DNA templates delivered in the context of protein-capped AdV genomes were shown to yield more precise targeted DNA insertion when compared to their free-ended and circular counterparts.

Ultimately, the insights gained from our research activities are directed towards developing genetic therapies for Duchenne muscular dystrophy and, in collaboration with other LUMC departments (i.e. Pediatrics, Immunohematology, Clinical Genetics and Human Genetics), hemoglobinopathies.

Figure 1. Diagram of adenoviral vector systems. L-ITR and R-ITR, “left” and “right” inverted terminal repeats harboring the viral origins of replication; Y, packaging signal.  The early (E) and late (L) regions are expressed before and after the onset of viral DNA replication, respectively. First-generation AdVs lack E1A-E1B or E1A-E1B plus E3. Second-generation AdVs have deletions in additional early regions (e.g., E2A and/or E4) being, as a result, produced in their respective complementing cell lines. Third-generation or “gutless” AdVs lack all viral DNA sequences except for the non-coding cis-acting elements ITR and Y. Adapted from: Chen and Gonçalves. Engineered viruses as genome editing devices. Mol. Ther. 24, 447-457 (2016). 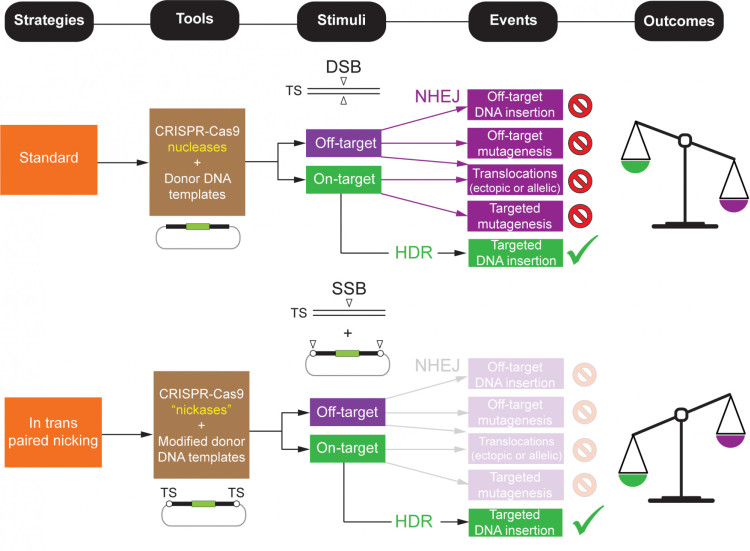