Circadian rhythmicity is a fundamental feature of biological organization and is deeply rooted in the biology of all living organisms. These rhythms have developed as an adaptation to the recurring changes in the environment brought about by the rotation of the Earth around its axis and the orbit of the Earth around the Sun. In order to anticipate these changes, innate clocks have evolved that allow organisms to prepare for the predictable onset of night and day. Our circadian system evolved as a robust mechanism to increase fitness. However, in modern society, the widespread use of artificial light and electronic devices has drastically—and rather suddenly—changed the photic environment in which we live, and compelling studies now demonstrate that a lack of a proper light-dark cycle is detrimental to human health. Recent data from our group and others showed that deviating from the natural cycles of light and dark can have severe effects on clock function. Reduced function of the central clock causes key organ systems to lose their synchrony and/or 24-hour pattern, increasing the risk of developing a wide range of severe health conditions, including diabetes, neurological and cardiovascular disease, immune dysfunction, cancer, sleep disorders, and depression. With our modern society’s 24-hour economy and our increasing use of artificial light, perturbations in our clock function are likely to continue to increase, underscoring the importance of developing strategies to strengthen clock function. 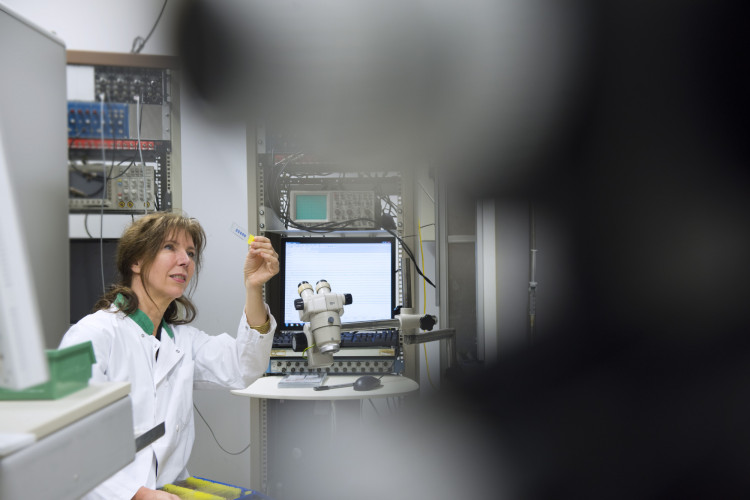 The identification of the suprachiasmatic nucleus (SCN) as a discrete site comprising the master circadian clock in the mammalian brain was a landmark discovery for contemporary cellular and neural science. In the SCN, circadian rhythmicity is generated at the single-cell level, and isolated SCN neurons maintain their intrinsic rhythm. Thus, each SCN neuron functions as an autonomous single-cell oscillator, and the SCN network functions as a multi-oscillator system. When multiple neurons are electrically active at the same time (i.e., “synchronized”), the SCN’s ensemble rhythm is strong; in contrast, if the neurons are not active at the same time (i.e., “desynchronized”), the SCN’s ensemble rhythm becomes weak and loses its control over the body’s rhythms. The molecular organization of the central clock is relatively similar between nocturnal and diurnal species, with individual SCN neurons being active during the light phase and inactive during the dark phase. Thus, the current model that attempts to explain the difference between nocturnality and diurnality is relatively simple: in nocturnal animals, the SCN’s output is believed to be inhibitory (thereby inhibiting behavioral activity during the light phase), whereas the SCN’s output in diurnal animals is believed to be excitatory (thereby promoting behavioral activity during the light phase). Strikingly, this view of nocturnality vs. diurnality has gone unchallenged for decades and has never been tested directly. However, recent evidence from our group and others suggests that this model is an oversimplification and suggests that key differences exist between nocturnal and diurnal animals with respect to the SCN’s network organization, as well as the SCN’s input, output, and feedback pathways. Identifying these differences is the first essential step towards establishing models of an impaired diurnal clock and ultimately developing strategies to prevent and/or reverse impaired clock function in humans. 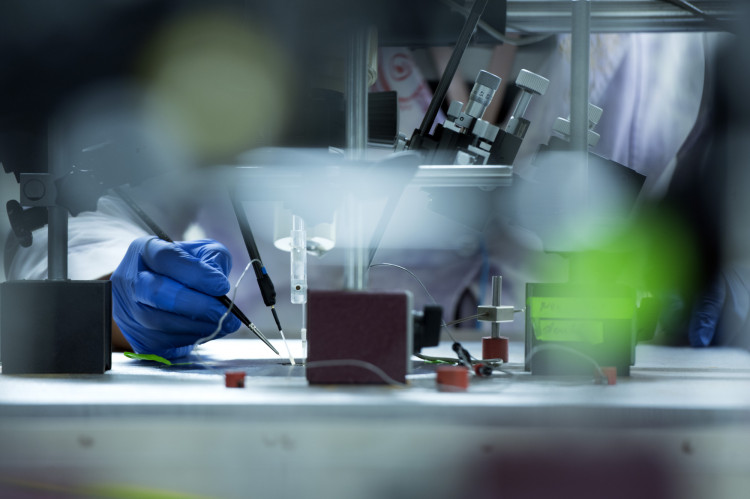 The study searches for potential interventions to maintain healthy brain function in the elderly. The aim of the project is to use a murine model to evaluate the impact of environmental light on aging brain circuits. Based on our recent findings that light regimes can influence the balance between excitatory and inhibitory neuronal activity, we will investigate how this affects neuronal network function. We want to use light as a tool to manipulate E/I balance in the old brain and evaluate the use light regimes to rectify ageing induced deficiency in brain function.

Among the many changes occurring in our body during aging, probably the least accessible to classical interventions are age-related alterations in brain function. Some of the reorganization taking place in the brain during aging may be as unavoidable and harmless as greying hair or may even be required to compensate for losses of neurons or synaptic contacts. Other changes however will lead to serious health problems like sleep disorders and may promote the development or progress of neurodegenerative diseases. These latter alterations in neuronal networks should be identified and be the focus of early interventions. In our own work, we demonstrated that the neuronal network of the Suprachiasmatic Nucleus (SCN), representing the central circadian clock in the hypothalamus, was altered in aging showing desynchronized neuronal activity which was correlated to fragmented sleep-wake patterns in old mice. 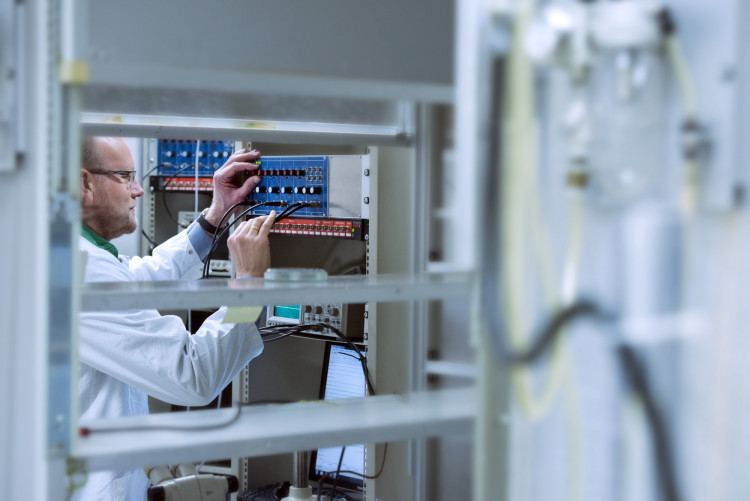 In the lab we combine different types of recording from rest-activity, to electroencephalogram, to electrophysiological recordings to investigate the interaction between the circadian clock, located in the suprachiasmatic nucleus of the hypothalamus, and sleep homeostatic processes.

Our research is inspired by the two process model of sleep regulation, the dominant model in sleep research since the beginning of the 1980’s. This model proposes that sleep pressure, or process S, increases during waking and decreases during sleep and that this pressure is reflected in the slow-waves (~2 Hz) of the electroencephalogram during non-rapid eye movement sleep. Next to this sleep homeostat there is the circadian clock which determines the timing of sleep. By recording these different variables, all related to sleep homeostasis and the circadian clock, and applying sleep deprivations protocols, light schedules or drugs that interfere with sleep or circadian clock functioning we try to elucidate the interaction between the two main processes that regulate sleep-wake behavior. Next to that we can use our techniques to investigate sleep and sleep regulation in different mouse models of human disease or apply newly developed pharmacological treatments to investigate their effect on sleep-wake behavior and brain functioning. 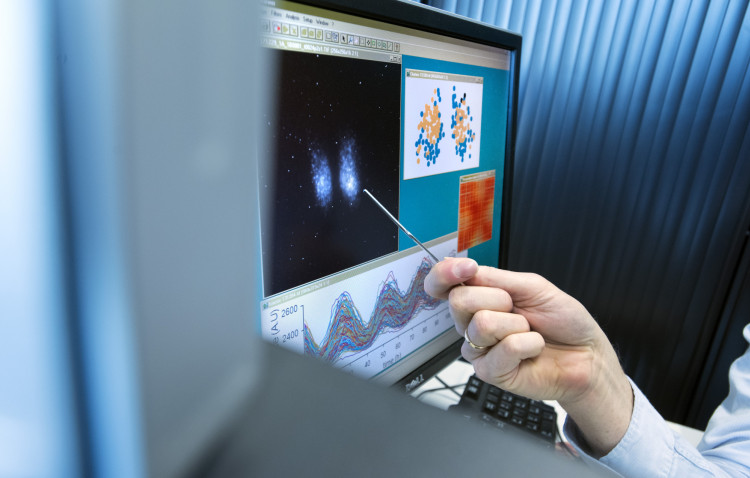 The interaction between organs, brain regions, cells, but also between proteins and genes are pivotal for proper physiological functioning. These interactions can be described as a network of interacting agents. In network theory, a lot is known about the organization of networks and how this influences the outcomes of the interactions and the emergence of new functionality.

Brain networks are a hot topic as witnessed by the Human Brain Project of the EU, however, most brain network research is done at the macroscopic level using brain regions as the smallest entities, for example using fMRI, EEG or MEG data. Microscopic brain networks have the advantage of straightforward identification of the network nodes, being the cells. However, due to difficulty in data acquisition, these microscopic studies are seldom performed.

Our group investigates the emergent functional properties in the brain stemming from interaction in dynamical brain networks, and specifically how the microscopic networks in the brain shape brain-function. Currently, we explore multiple mathematical techniques to establish the functional connections between single neurons in the circadian clock, which is located in the suprachiasmatic nucleus (SCN), in order to create a network and apply network measures. Some of the techniques that we use are Detrended Fluctuation Analysis (DFA), clustering analysis, correlation analysis and oscillator analysis. The ultimate goal would be to understand the function of these dynamic networks in the brain, and possibly discover therapeutic treatments based on these network properties.